Chronic liver disease is the progressive degeneration of liver functions over a period of time. Liver functions such as production of proteins, clotting factors, detoxification of toxins and elimination of bile are all maintained primarily by the liver cells. However, with time these functions are hindered due to many factors which include chronic inflammation, breakdown, regeneration, and fibrosis of liver tissue. 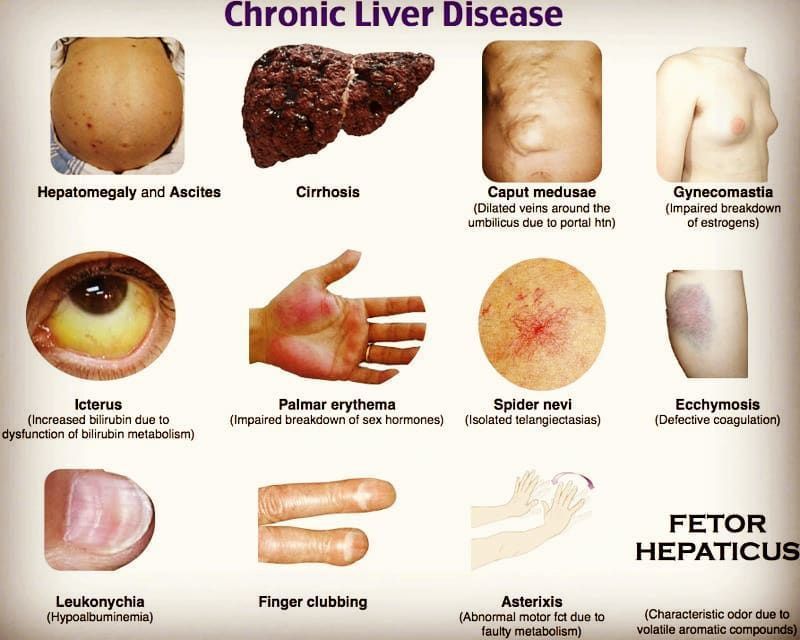 One of the most common causes of chronic liver disease in the United States and Europe is autoimmune disorders. Autoimmune disorders refer to any situation in which the immune system of the body attacks cells and tissues in the body. This can occur in patients with a variety of chronic and inflammatory diseases including hepatitis, HIV, infectious mononucleosis, multiple sclerosis and more. Some patients with autoimmune disease have no known etiology and their only known symptom is the manifestation of scarring and fibrosis within their liver cells.

Patients with chronic liver disease due to autoimmune disorders will experience dysregulation of several metabolic processes. These metabolic processes include hepatic portal circulation, fatty liver, and lipid metabolism. Portal circulation refers to the transport of nutrients from the liver to several locations in the body including the gastrointestinal tract, the skin, the kidneys, the lungs, the heart, and several other organs. Fatty liver and lipid metabolism refer to the processes by which the liver produces and utilizes fats, cholesterol, and amino acids. Dysregulation of any one of these processes can result in significant and often life-threatening consequences.

The third most common cause of chronic liver disease is nonalcoholic fatty liver disease. It is the accumulation of fat within the cells of the liver. A common cause of fat buildup in the liver is chronic alcohol abuse. Alcohol abuse results in high levels of acetaldehyde in the blood stream, which causes a breakdown of acetylcholine receptor sites. Acetaldehyde is the chemical in which the brain releases neurotransmitters such as dopamine and epinephrine that control many normal bodily functions, such as mood, muscle tension, and sexual function.

Liver biopsy is one of the primary tests for identifying chronic liver disease and has been found to be a very effective screening test for a variety of conditions. Ultrasound testing has also been used frequently in patients suspected of having hepatitis C or nonbacterial cholestasis. Although ultrasound scanning does not always show significant inflammation in patients with cirrhosis or nonbacterial hepatocellular carcinoma, it does offer other key indicators for identifying potential problems. Patients with both hepatitis C and nonbacterial cholestasis who have higher than normal ICERs are often candidates for biopsies.

Patients with cirrhosis or nonbacterial hepatocellular carcinoma are usually treated by surgical procedures, in order to remove the hepatic tumor and kill the affected cells. However, sometimes surgery is not enough to prevent recurrence of the disease. In these cases, the treatment of the liver will usually focus on reducing the effects of the damage caused by the primary disease.

In addition to ultrasound imaging studies, blood tests can also be done in order to diagnose potential serious problems. There are many types of advanced liver function tests that can be used to confirm diagnosis of chronic liver disease and are often used in conjunction with ultrasound studies in order to confirm the positive results of the earlier imaging studies. The most common of these is the hepatic portal hypertension test, where the blood sample from the right hepatic portal vein is compared with results of a previous study in order to identify a possible link between the symptoms and the portal hypertension. Abnormalities in chemical markers such as protein, ferritin, and immunoglobulin are also associated with a variety of serious medical conditions including autoimmune hepatitis and chronic hepatitis.